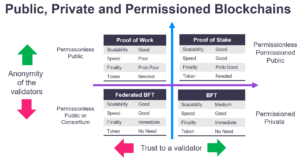 A permissionless blockchain is open. Any individual can participate as a node and stay anonymous. This makes it very easy for a node to tamper and modify transactions and include them in a new block. This can lead to a fork in the blockchain, which occurs when two parties are not in agreement with each other. A consensus algorithm can help us avoid such forks so that everyone agrees to a single version of truth.

Related Article : What to know before implementing blockchain in your business

In permissioned blockchains, not everyone can join the blockchain. Each individual will need special permission from the network administrator or the owner to join the network. This is useful for companies, banks, and institutions that prefer to comply with the regulations and would like to have complete control of their data. In a permissioned blockchain, all the participating nodes are known and chosen. However, consensus is still required because we can’t assume that every node is trustworthy.

What is a blockchain consensus protocol?

Permissioned blockchains usually use pbft algorithms. One of the models that is used to facilitate consensus in blockchain is the practical byzantine fault tolerance algorithm (PBFT). In this model, each node exists in an internal state, which means that it will maintain an ongoing specific information or status). Each time a node receives a message, they use the message with respect to their internal state to perform a computation or operation. Consequently, this computation will send messages to other nodes to ask if the transaction is valid. After receiving verification from all of the other nodes, the first node will broadcast that decision with all the other participants in the network. A consensus decision is achieved based on the total confirmations submitted by all the nodes.

PBFT can be very beneficial for low latency storage systems, This type of model is often used in digital assets backed platforms that don’t need a great amount of capacity, but carry out a large number of transactions. PBFT makes sure that the transaction records within the network are accurate. A few examples of permissioned blockchains that use this model are Hyperledger and Chain.

This model guarantees security and transparency . It is ideal for use cases such as cross border remittance, real time KYC etc. Common examples of blockchains that use this model are Stellar and Ripple.

Related Article : How to choose the right Blockchain as a Service provider?

In Round Robin Consensus, validators take part in the consensus process by signing votes for blocks. Usually, there are three main types of votes: a prevote, a precommit and a commit. To receive more than two third of commits means to receive commits from a two third majority of validators. A block is considered to be committed by the network when a two third majority of validators have signed and broadcasted commits for that block.

At each height of the blockchain a round-based protocol is run to determine the next block. Each round consists of three steps (Propose, Prevote, and Precommit), along with two special steps Commit and NewHeight. The Propose, Prevote, and Precommit steps each take one third of the total time allocated for that round. Each round is longer than the previous round followed by a small fixed increase of time. This allows the network to eventually achieve consensus in a limited concurrent network.

Round robin consensus process doesn’t rely on a single participant for the block validation process. In this model, several nodes play a major role in validating and signing transactions. which makes this process more secure when compared to other consensus processes. There are also lower chances of double spend attacks due to the voting power distribution among trusted nodes. Round robin consensus mechanism is ideal for the trade, finance and supply chain industries. Some well known permissioned blockchains that use the Round Robin consensus method include Multichain and Tendermint

If you are trying to decide on the right consensus protocol for your blockchain, there are some things that you should take into account. They include

Most of the time, these types permissioned blockchains usually use pbft algorithms (Practical byzantine fault tolerance) and its variants including voting and lottery-based consensus as opposed to consensus models like the Proof-of-Work consensus that are prevalent in the major permissionless public networks.

The adoption of blockchain technology can provide many benefits like enhanced transparency, security and traceability to businesses in all industries. However, blockchain networks cannot function properly without consensus algorithms to verify each and every transaction that is being committed. This is why it is crucial to choose the right consensus model for your specific blockchain.