Blockchain databases consist of several decentralized nodes. Each node is involved in administration: all nodes check for new additions to the block chain and are able to enter new data into the database. In order to add information to a blockchain, most nodes must reach consensus. This consensus mechanism ensures network security, which makes it difficult to intervene.

In Bitcoin, consensus is achieved by computing (solving complex puzzles), while Ethereum tends to use share proof as its consensus mechanism. These are very different protocols in their concept, the use of which greatly influences the main data transfer capabilities in these ecosystems.

A key feature of the implementing blockchain technology, which distinguishes it from traditional database technology, is the general availability of verification, which is ensured by integrity and transparency.

Integrity: each user can be sure that the data they retrieve is intact and unchanged from the time they are registered.

Transparency: each user can check how the blockchain changes over time.

A centralized database can not always provide such opportunities, since the data can be easily and quickly changed without the knowledge of other participants. Regarding transparency, not all databases can provide data change tracking, but even if there is one, it can be easily cracked.

CRUD vs read and write operations 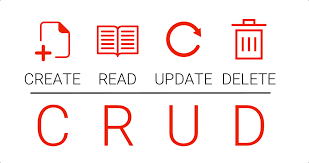 In a traditional database, a client can perform four functions on the data: create, read, update, and delete (collectively called CRUD commands).

A blockchain is intended to add only a structure. The user can add only additional data in the form of additional blocks. All previous data is permanently stored and can not be changed. Thus, the only operations associated with block circuits are:

1. Data reading operations: these are requests and data extraction from a blockchain.

2. Data writing operations: data is added to hash of blockchain.

3. Check and record of data (but not always).

A blockchain allows you to perform two functions: verification of transactions (data) and recording of new transactions. A transaction is an operation that changes the state of data that resides on a blockchain. Although the previous entries in the blockchain must always remain unchanged, the new entry may change the state of the data in past entries.

The essential difference between the two systems is decentralized control.

Decentralized management eliminates the risks of centralized control. Anyone who has high access to a centralized database can destroy or corrupt data in it. Therefore, users rely on the security infrastructure of the database administrator.

Traditional databases are completely contained within a single object, regardless of their structure (SQL databases or without SQL). This includes access to reading and writing data, which is possible only through applications controlled by special mechanisms to which the database belongs. Common databases, on the other hand, include read and write access, including several objects.

Private block circuits imitate the security process used by public blockchains, such as bitcoin, but do not include mathematical guarantees at the level of data verification or regarding the irreversibility of their constituent.

However, they still use cryptography and data structures, such as Merkle, to ensure that invalid transactions are not added to the blockchain.

In the end, private blockchain chains provide a higher level of error checking and transaction reliability than regular shared databases.

Although they do not use proof of work, transaction blocks are checked using some other forms of consensus mechanism.

The most popular algorithms are Raft and Juno. These consistent protocols operate on the basis of a leader-follower model, in which for each block a leader is selected that creates a block and adds to the blockchain. There are various ways to eliminate errors and anomalies by the system.

Shared databases have suffered from the inability to prevent malicious activity in the past. This happens, for example, when one of the participating nodes is hacked, and this object writes “damaged” data to a common database, which makes it invalid for all participants.

Private blockchains solve this problem using cryptography and technologies similar to those used by bitcoin and public blockchains.

Most blockchains are uncontrollable systems, for example, bitcoin. All information is recorded in this blockchain by the uncontrolled stream, without the signature of the identification data and does not have a single data storage location.

However, this does not prevent the use of a specially developed protocol that will only allow registered users to write data.

Despite the fact that confidentiality in the blockchain requires a large amount of processing power, it is several times better than the traditional private database.

If trust is at the highest level and there are no problems with storing large amounts of data, and the main idea of implementation is confidentiality, the database based on the blockchain will not bring you special advantages.

Increasingly, public opinion of the blockchain’s productivity converges on one thing — too slow system, but this isn’t that. Perhaps the blockchain does not have the same speed as, for example, Visa, but is second to none to popular databases. In addition, it should be noted that the powerful blockchain project was able to construct a network that is a couple of times faster than Visa.

Of course, in the near future, the blockchain will increase its performance, because, if we recall, the first traditional databases absolutely did not have good optimization and only over time were able to achieve modern capabilities.

Banks and financial institutions are increasingly investing in blockchain technology.

Nevertheless, most of these efforts went towards private blockchain space.

There are many reasons for this. Private blockchain keys are much better than state blockchains, and network parameters, such as network overload and transaction fees, are known in advance.

The development of a basic protocol is also more predictable in the case of a private blockchain and gives more control to the banks that control it.

In addition, banks and financial institutions are regulated subjects that cannot operate under open protocols without conducting due diligence of the parties involved in the transaction. It is unclear whether rules are required to determine the type of bidding for certain classes of transactions to ensure final agreement.

It is also necessary to note the reputational risk of the blockchain system associated with the use of technology in Bitcoin cryptocurrency. The system was greatly offended in the media with associations in the drug trade and fraud, but still, it does not greatly affect the banks.

However, even today, many private blocking “anchors” in the chain, such as bitcoin, periodically ensure the integrity of their data.

By their nature, private blockchains require different organizations to unite and agree on a common set of standards that will guide them. This is due to the different requirements of the system participants.

It also remains unanswered the question of who should be able to add or remove members and which jurisdictions should be allowed to intervene (for example, to cancel transactions for legal or regulatory reasons).

The first problem was partially solved by Hyperledger, a Linux initiative whose goal is to provide common block standards.

The future of the two competing ideologies will depend on management issues, scalability and reputation.

Why is a private blockchain much better than an old-fashioned centralized database?

Does the Metaverse need blockchain to ensure widespread adoption?