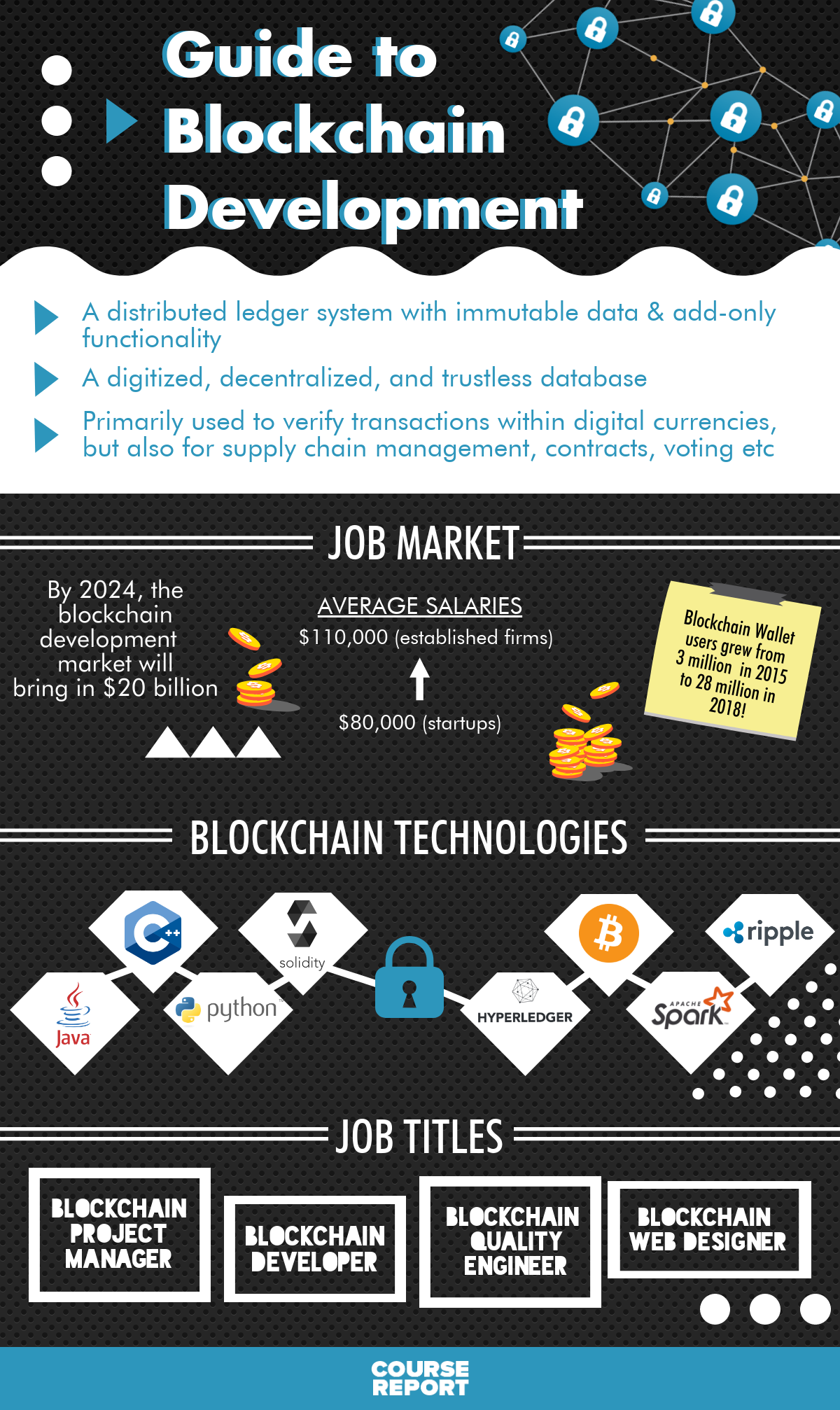 What is Blockchain Development?

A blockchain is a distributed ledger system with immutable data add-only functionality. Essentially, blockchain is a digitized, decentralized, and trustless database. Blockchain is an ‘add-on’ system where the most recent transactions are constantly growing as ‘completed’ blocks, and they are recorded and added in chronological order. The cool thing about using Blockchain is that users can keep track of digital currency transactions without central recordkeeping. So think about it like this – there’s no one single place this digital information is being held, it’s distributed all across the world!

Currently, Blockchain technology is primarily used to verify transactions within digital currencies, but it is possible to digitize, code and insert practically any document into the blockchain. To ensure that the process is secure, when you enter the document, it creates an indelible record that cannot be changed. Then, the record or transaction authenticity can be verified by the entire community using the Blockchain instead of a single centralized authority.

It’s safe to say that the industry is seeing tremendous growth – here’s what we know:

The market is mainly being driven by mammoth investments made by several startups companies working in the same field, but as time goes on, you can expect that a more crowded market.

Cryptocurrency refers to digital or virtual currency used for the buying and selling of goods. Originally, Blockchain was developed as the accounting method for the virtual currency, Bitcoin. But because blockchains are known as distributed ledger technology (DLT) and are seen in a variety of commercial applications today, there are many other cryptocurrencies in the market like Litecoin, Ethereum, Ripple and more.

Other Uses for Blockchain

Blockchain development is not just for cryptocurrency; as the industry has evolved, various fields can utilize blockchain. Some other uses for Blockchain include:

Wondering where to focus your efforts? Here are some of the top programming languages used in Blockchain development:

And here are some of the top Blockchain Platforms and Systems:

Since the Blockchain Industry is on the rise, we’re sure job titles in the field will change. Right now, here are some of the top Blockchain job titles:

Here are some examples of coding bootcamp grads who already work in Blockchain:

Developing blockchain distributed ledgers for businesses was recently ranked first among the top 20 fastest-growing job skills – and job postings for workers with those skills grew more than 200% last year. Because there are currently only a few qualified candidates with Blockchain knowledge, it’s not surprising that salaries for blockchain positions are typically higher than in other specialized technical areas. Average Blockchain salaries range from $40,000 to $150,000. Here’s a breakdown of average Blockchain developer salaries for established firms and startups:

So are you ready to start learning Blockchain? The following courses are designed to give you a primer on the underlying technology and economics behind the cryptocurrency boom. Below you will find a list of specific Blockchain focused bootcamps, and a list of coding bootcamps that incorporate Blockchain into their curriculum.

1. B9labLength: 12 weeks, part-timeCurriculum: B9lab teaches Blockchain, Ethereum, Hyperledger Fabric, and more through a bootcamp and a variety of courses. B9lab aims to offer a wide range of different blockchain technologies and does not favor a single technology stack, to provide a balanced, well-rounded educational experience. Students should have one year experience as a developer before applying.Career Prep: Industry-experienced instructors provide active tutoring with one-on-one, personalized support for professional growth.Cost: €1450Location: Online

Coding Bootcamps which cover Blockchain in the curriculum:

How Is Java Used In Blockchain - PrimaFelicitas